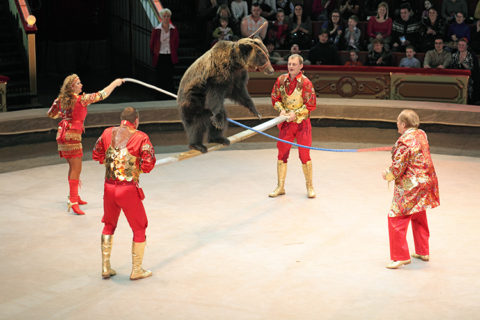 Written by Susan Hargreaves, Author of Animal Hero Kids Voices for the Voiceless

The stage loomed three entire blocks of seats away. I hoped my compromised – due to a hereditary ailment – hips would carry me that far in a very short period of time. The performing balancing bear act of the Moscow Circus was coming to a close; the two brown bears wearing their incongruous, pitiful performing outfits were being prodded off the Toronto Sky Dome stage. 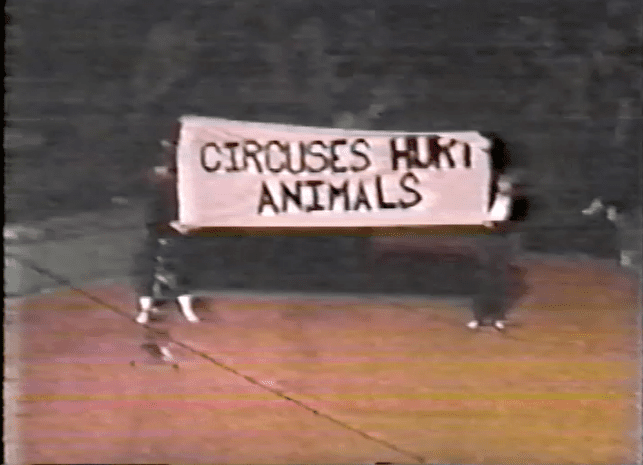 The timing of our mission needed to be exact, right when the bears and their captors were off the stage and just before the human act came on. The banner I had hidden in the back of my pants was ready for action. “Now,” I whispered. LeaAnn Mallett, my courageous colleague, and I walked fast down the wide concrete steps, trying not to attract attention in the half light. Adrenalin took over as we hurtled on to the stage and unfurled a seventeen-foot banner in nanoseconds “Circuses Hurt Animals” proclaimed the impossible to ignore statement. 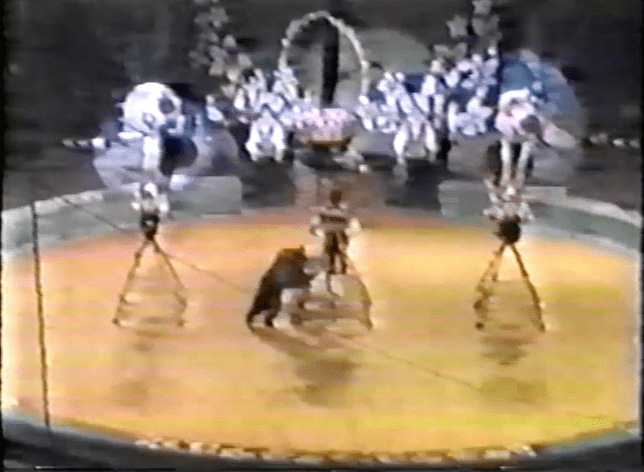 The audience had a surprisingly mixed response. Some clapped, some booed, some were puzzled, possibly wondering are these women supposed to be on the stage. Yet, the inescapable truth lingered for a few still moments before we were tackled and removed from the stage. Then the statement was broadcast again as the first item on11 p.m.  TV news. One announcer said “Two Toronto school teachers were tackled from the Moscow Circus stage after the bear act.” Another said “(They) have been banned for life from entering the Toronto Sky Dome again unless they write a letter asking for forgiveness.” 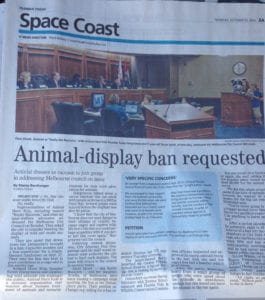 Twenty-six years later, the truth about animal exploitation is more widely known and accepted, thanks to the undercover work of PETA and the protests, locally and globally, resulting in widespread media attention. When I spoke in favor of a proposed Exotic Animal Display ban at a Hollywood City Commission meeting in 1989, I felt the moment most people will realize wild animals belong in the wild was imminently closer. After all, it seems kind of a no-brainer “wildlife need to be free.”

The piteous images of elephants, bears, tigers and lions showed us miserable shadows of their former wild selves, in cages, chains, being beaten and tied down. Today the former ticket buying public is educated enough to vote against animal abuse with their consumer dollars. This is evidenced by Ringling’s circus recent announcement of closing in May of 2017. The recent signs of progress is only a segment of the tipping point against captive wildlife shows to come.

In Animal Hero Kids school assemblies the young audience show their knowledge of other animals’ natural lives by answering the questions posed “If you were a bird what would your favorite thing to do be?” “Fly” they answer in unison. “If you were an orca, where would you want to live?” “in the ocean,” shout out the youngsters. It is only when the priority is profit margins this natural logic is interrupted, as in the case of aquariums, circuses and zoos.

“It seems kind of a no-brainer wildlife need to be free.”

Animal Hero Kids Co-presidents from ages 4 years to 15 years have enthusiastically reacted on video to Ringling’s recent news. You can view the video on AnimalHeroKids.org. To promote further progress for animals, the book “Animal Hero Kids Voices for the Voiceless” equips youngsters with the tools to follow their hearts and change the lives of animals in need. Each chapter concludes with suggested classroom activities and practical tips. If you wish to join us in our 2017 goal to gift this empowering book to school libraries across the United States please go to AnimalHeroKids.org home page

Susan Hargreaves is the founder of Animal Hero Kids, an all-volunteer charity educating, empowering and recognizing kind youth. She is the author of  Animal Hero Kids: Voices for the Voiceless, which includes tips from famous animal advocates; Joaquin Phoenix, Russell Simmons, Sir Paul McCartney, and Jessica Chastain, she is an Honor Book award winner for notable contribution to ecology and nature.  Susan is an award-winning educator, radio host, ex-undercover investigator and activist. Russell Simmons said her “book is for anyone who cares about animals, kindness and justice” Susan has been vegan for 34 years and has been a defender of animals for almost four decades. To help realize the 2017 goal of gifting the Kind2All book in school libraries go to AnimalHeroKids.org

Posted On June 25, 2016
My cell phone stores a collection of photographs from last year's bloody bear hunt in Florida. I can't help but notice how similar a bear's…

Posted On March 25, 2019
Plant Power to Stop Climate Change & Help Animals Here we are again in the month of April when good intentions from Earth Day events…

Posted On July 20, 2017
Thank you to all who supported the Animal Hero Kids "changing hearts, changing choices" mission of donating the "Animal Hero Kids Voices for the Voiceless"…