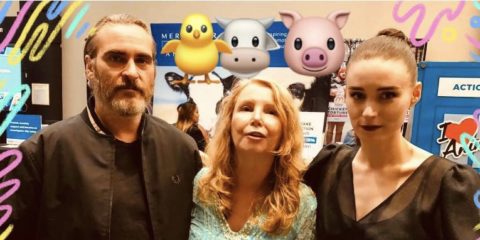 The Stars are Aligned

Has there ever been an Oscar acceptance speech like it? Is there any person anywhere who has been fighting for other animals not to be harmed that didn’t roar a resounding ‘’yes!’’ jubilantly from their living rooms when Joaquin Phoenix told the world stage the truth about stealing babies from cow mothers so we can sell their milk. Lena Durham, the actor/creator/producer of the hit show “Girls” stated in a tweet, …”Joaquin has finally made me go vegan”

To describe the recent truth-telling on-air and the wholehearted response to Joaquin’s kind2all message I have created the phrase “the Joaquin Effect” if anyone wishes to use it, the royalty fee is one vegan donut, payable, as soon as humanly possible.

The need to go plant-based for the planet, for the animals and for human health is a fact many stars are most definitely aligned on. Rooney Mara, Ellen Degeneres, Portia DeRossi, Leonardo DiCaprio, Brad Pitt, Natalie Portman, James Cameron, Venus Williams, Woody Harrelson, Snoop Dog, Robert Downey Junior, Jessica Chastain, Moby, Billie Eilish, Lewis Hamilton are a sampling of the big names who have hopped aboard the Veganville train.

‘’I was an Animal Hero Kids at 3 years old when I felt that animals had the right to live free of harm and suffering. It is vital to foster empathy and critical thinking in youth which leads to compassionate actions, and ultimately, a more peaceful world for all. ‘’

Joaquin was referring to witnessing fish being killed when he and his family were on a boat, it horrified him. The entire family became vegan 40 years ago, at the time the word was relatively unknown. Fast forward to today, there’s an explosion of marvelous, scrumptious vegan products, it’s so easy to replace not subtract with kinder, healthier and more eco-friendly plant-based choices.

So, Joaquin and any of the celebs I mentioned who may be reading this. Help us shed the public spotlight on the goal of gifting the Animal Hero Kids book to every school library after each free kindness to all education program, I present in schools. Actually, as I write this an awesome idea comes to mind! How about some of those wonderful celebs I mentioned earlier choosing their favorite animal rescue story in the Animal Hero Kids book and read it for the audio version of the book, to add to the free, Animal Hero Kids education resources? Mother Nature is one of the Animal Hero Kids’ free kindness education program storyteller characters. She may look familiar…..

Sauté the garlic, Spanish onions, chili powder, in the olive oil on medium. Save the green onions for later.
Add veggie burgers crumbled to the wonderful smelling sautéed garlic and onions, sauté together for 5 minutes, then add the red kidney beans, sautee, taste test, add the Braggs, add the black beans, stir, taste test, add nutritional yeast, a sprinkle, then add the tomatoes. Turn on low, stir occasionally, sometimes a bit of basil is good or Italian seasonings, and a touch of curry powder, simmer for 20 minutes.

One of the great things about one-pot cooking is fewer dishes, and if you make enough, no pot washing as the pot can go right in the fridge after it cools down. Good with melted vegan cheese toast, too. So, why not enjoy watching the movie, Johnny Cash, while savoring the scru vegan chili -or your favorite Joaquin flick, settle in for the night and bask in the Joaquin Effect?

Posted On November 1, 2015
A memorial for slain black bears will be held in Orlando on Sunday, November 1st at Lake Eola. The bear memorial is being sponsored by…

Posted On April 1, 2020
Today European, Asian and American leaders issued a united news release announcement admitting they have ignored the true cause of most of the viruses that…

Posted On April 13, 2015
Brandon, one of the Animal Heroes featured in the new book, "Animal Hero KIds-Voices for the Voiceless" gives a copy of the book to Jane…